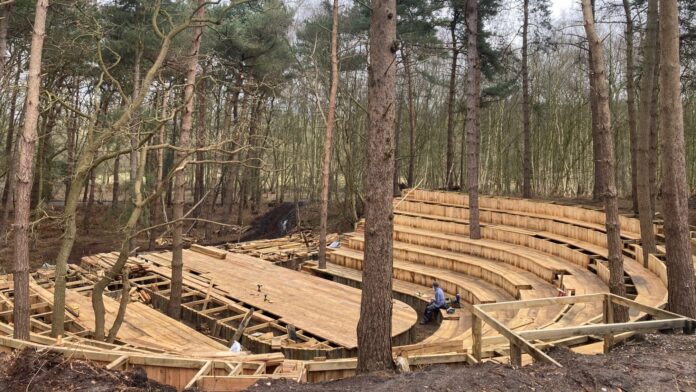 Thorington Theatre is a new outdoor amphitheatre space that has been built in the beautiful Suffolk woodland, in a space formed by a World War II bomb-crater that just seemingly begged to be transformed. The site has been constructed with the smallest carbon footprint possible; with little to no work needing to be done with the space and almost all of the timber has been sourced through sensitive and sustainable coppicing from the surrounding chestnut trees.

As they gear-up for their first season of work this summer, we caught up with Joey O’Hare who is involved in the project alongside her mother and project manager Lindy, who funded the project and owns the land it’s been built on, and Silas, who is leading the construction team.

Speaking of the inspiration behind the theatre, Joey explains: “I think we were inspired by nature and by the natural shape. The arts are such a fantastic thing for the community, for inspiration, and for education. It’s such a great thing to invest in.”

Thorington Theatre aims to be as eclectic and inclusive of a space as possible. Productions will vary from local youth theatre groups and national touring companies to Shakespearian classics, musicals and circuses.

Joey adds “We want to support as many people in the arts as possible.” Talking about the upcoming season she continues, “There are so many shows to look forward to! There is a really funky one called The Spirit of Woodstock, it’s a raucous wild-ride through that period of history. There are lots of Shakespeare classics like The Tempest and Romeo and Juliet. There are some really good family friendly shows as well such as Wonder with Grimm, Wind in the Willows and Summertime Cinders is a pantomime style one. There’s so much fantastic theatre for the whole family, and there’s something for everyone.”

Building a brand-new venue in the open air amidst a pandemic has proven difficult, as we speak the venue is 99% finished and it now looks like a “proper theatre with proper seats”. However, Joey adds that the pandemic meant the work was forced to halt but she said: “It has been tricky but luckily it means working outdoors, and it’s such a big site that for some of lockdown construction was able to continue because everybody’s more than two meters away from each other”.

Moving forward, the future is bright and they are doing all they can to navigate through the adversity. Joey explains: “We’re lucky that the space is very big, so when at capacity it seats 350 people, but with social distancing and people sitting in their bubbles we anticipate being able to accommodate 200 people. We hope no matter what happens we will be able to put on some shows this summer.”

However, be prepared for all weathers as she hastily adds “The only thing it’s not friendly to is the elements! We are completely exposed in the middle of Mother Nature, and that’s certainly the beauty of this setting. It’s vast, but it’s very intimate. You’re right in the trees, and we have cut down as few trees as possible so we’ve left all the big trees, even those that are literally in the seats and on the stage as we’ve built around them to make it feel as if you’re completely nestled in the Woodlands – but that does mean if there’s a heavy shower or strong winds, it’s going to get a bit exciting!”

Once they’re set-up and settled, the theatre has the potential to use the digital elements like filmed or live-streamed productions like many theatres have adapted to in the past year – which has also been a great way to increase accessibility. While Joey confesses it’s not something they have thought about yet, she wouldn’t rule it out. “That would be awesome, and it would be really atmospheric. At the moment we’re using technology to build a website and sell tickets so the box office is all live online, but definitely in the future if we can get a bit of tech-support that would be great to look into” she comments.

Until then, while we wait for the doors of the Thorington theatre (and indeed, theatres across the country) to open their doors – Joey’s advice for ways to keep supporting the arts would be “to look to the future”.

She expands “It feels like the world is waking up now, and you can buy tickets for gigs, plays, talks, and all these lovely things so I think be brave and look at what’s available. Even if it feels really far in advance, buy a ticket and go ahead and support the theatres and artists.”