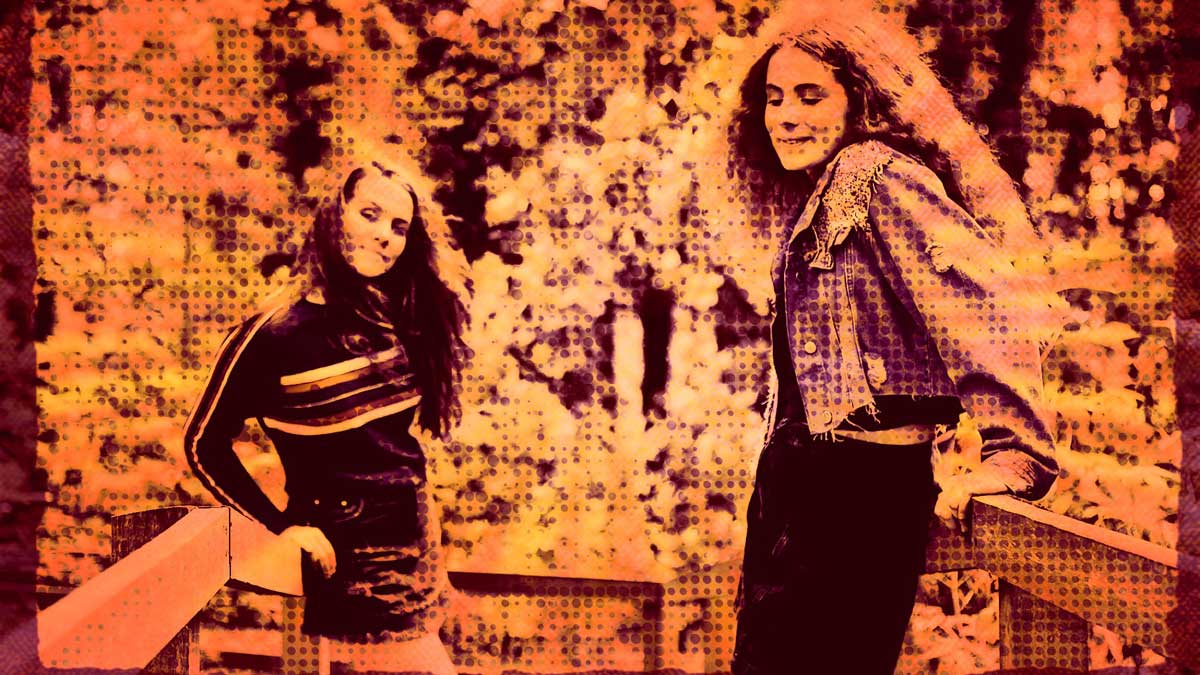 Three Years Younger are an Indie-Pop duo of two sisters from Suffolk, who have been performing and writing together for a few years now. With time, they have developed their style, matured their sound, and realised music is the career they wish to pursue.

It has to be said, they’re off to a flying start, having won the Under 18s Cambridge Band Competition, the Kimberley Rew Award in 2019 and playing slots at the Cambridge Strawberry Fair, Cambridge Folk Festival, Camp Bestival and the Big Weekend in Cambridge.

Following the release of their self-produced debut EP ‘Close the Door’ during lockdown, they’ve received radio play on Cambridge 105, Sound Street Radio and a live set and interview on BBC Introducing Suffolk. We caught up with Charlotte and Megan Simpson to talk all things music and how it’s been learning to adapt to the pandemic world.

What is your relationship with music – has it always been in your life and what inspired you to write your own music?

Megan: I guess it’s always been in our life because our parents are quite musical. Our mum plays the saxophone and our dad plays the piano, so they encouraged us from a really young age to use music as the way we express ourselves. There was always a piano at the end of the house, so it was quite easy to do that! One thing we’ve really found is that Charlotte and I have completely different song writing styles.

Megan: Yeah, I’m quite people and relationship-centred. That really inspires me. If something’s affected me in my life, whether it’s positive or negative, I will instantly hit the piano and write songs until I’m done and got that off my chest. Whereas I think Megan is more of an experience-based writer.

Charlotte: Yes, I write lots of angry songs! Recently in this time, we have been writing a lot of songs about feeling trapped with this lockdown and how it just feels endless, as it’s just on the forefront of our minds at the moment.

That leads nicely into my next question, which was what you’ve been doing to keep busy over the past year?

Charlotte: When all of this madness started back in March 2020, we decided that we wanted to release our first EP. We worked on that until June, and released our ‘Close The Door‘ EP. We spent the rest of the year promoting that and released a music video for one of the songs in December. We have found from our EP, that we’ve got a lot of collaborative projects in the works because we have met lots of people through it and, although there haven’t been many gigs, it’s been a weirdly quite productive and creative year.

Megan: Adding to that we also met drummer and bass players, Tom and James, and they are amazing. They brought a lot of light into 2020. We could have been sitting at home going ‘what are we going to do?’ but they’ve been amazing and given us a chance to start having a different dynamic with live performances. We hope that when we get to play live they’ll be there and our songs will really pop on stage!

That’s great news! How was it releasing music in lockdown – was it quite positive for you?

Charlotte: I think there were positives and negatives to it. We did everything ourselves, apart from the mastering as we sent it off to get it mastered. It was a learning curve for us, in the sense that if we were to do the same thing again now, there would be changes that we would make, but I think that we got a lot out of it.

Megan: We really did. That first lockdown was so scary for everyone, and you could either put your mind to something creative to distract yourself from it, or go the other way and slump. We’re so lucky to have each other to be able to actually focus on something we love because it really was a distraction from the madness of what was going on.

You’ve been creative in other ways as well with vlogs, the music video and a few virtual gigs. How has that side of things been, with that digital element?

Charlotte: It was brilliant. I have to say, the live streams was another thing that really kept us inspired us during this time, because we were going through a slog and slump then we’d do a live stream and come out going ‘oh yeah this is why we love music’.

Megan: That’s so true. As a band, people will often see the lovely, happy exterior on our YouTube and such, but we are quiet among people so having virtual gigs really helped make us realize what we truly wanted again and it was like, ‘Oh, this is exactly what we’re willing to wait for’. We also got a lot of positive feedback from the virtual gigs we did on Facebook, and they got shared quite a lot which was a really nice feeling and to have that support.

Definitely some positives there then! What is it that you miss most about performing live?

Charlotte: I’d say everything but that’s not a very good answer! I think meeting people, and people being able to have that immediate response to your music. I think that’s the thing I miss the most.

Megan: I also think, every time you go to a gig, you meet new people; like a venue owner or the person at the bar, you can have that direct contact with all of them. We were able to do a real-life gig just before this lockdown, which was at the Hunter Club – a place that we’ve always wanted to perform, so that was such a lovely experience. It was difficult because all of the tables were spread out and it wasn’t like a normal setting because of COVID, but it was a special performance nonetheless.

Charlotte: I think that as soon as people are able to do live gigs again, people will go ‘oh no, not livestreams anymore, we want the real deal!’ and I think they will probably start-up as soon as possible.

Megan: I agree. I think it is wishful thinking, but a lot of musicians at the moment are all holding on to when it gets back to normal. That is quite a broad statement because it’s taken a whole year, and we’re back where we started in a way. The one thing that we’re all clinging on to is the vaccine, and the hope that once that’s been rolled out and is protecting the older and vulnerable people, we can actually start to see a light at the end of the tunnel where live gigs will be more possible and face masks will be hopefully a thing of the past.

We’ve got to be optimistic! What else would you advise the local community can do to support the music industry and independent artists like yourselves?

Charlotte: Good question! I think everybody needs to keep looking out for each other and doing what they’re doing at the moment with the live streams and the gigs. I think it would be great if venues pay attention to the people who are getting in contact with them ready for a gig, especially as the people that we’re in contact with are worried that when gigs get to start happening again, you won’t be able to get one for a full year because there will be such a back catalogue. Keep protecting new artists, and look out for the little guy!

I like that end quote! Why do you love what you do and what would your message be to those who also love and miss live music as much as yourselves?

Megan: I can speak for both of us here, that we love music because as cheesy as this is about to sound, it feels right when everything else is wrong and it’s always going to be with us. The downside is the fact that we get quite obsessed by it because it’s all-consuming. Songs, performing, and music feels right; but it does mean that, especially in this time when everything is so difficult, you have to ride that wave and it’s tough – but we love it, and we’d never give it up. I think we’ve had a few experiences, where we’ve almost said ‘right we need to stop this. We need to go to university and do different things separately’ but we just know that this is the anchor and our life.

Charlotte: This is also going to sound cheesy, but I would just say if you want to be a musician or artist of any kind, just do it because otherwise you will regret it all your life if you didn’t try. For me and Megan, even if this was the furthest we ever got in music, at least we would know that we’ve done everything we can to get as far as we can and we’ve still been able to do some amazing things that I’ll remember forever.

Megan: I think that’s refreshing because sometimes it’s really easy, especially when you’re a musician at the beginning of your journey, to lose hope; but actually when you look back, you can go ‘No – I did this, I did that, and I worked at this, I worked at that’. As long as you keep going at your pace and you put as much effort into it as you healthily can, one day something is going to happen because people don’t glaze over that and I really believe it pays off. I think what Charlotte said about just doing it if you’ve got a passion for it is such good advice for people interested in it.

Lastly, I’ve got a fun one to end on, which is if you could collaborate with any artist dead or alive, who would it be and why?

Megan: We have different ones. Coldplay, hands down for me. Everyone who I’m around at the moment and people my age are so negative about Coldplay, but I know that I went and saw them at a fully-packed Wembley Stadium and that was our first gig. And it was the most incredible and amazing experience. They inspire our music, so it has to be Coldplay.

Charlotte: For me, I think probably 21 Pilots because I think they’re amazing. Luckily maybe we’d get both of them, at once? *Laughs*

Make a super group! Nice, I like it… a big thank you to Megan and Charlotte of Three Years Younger for chatting with us.