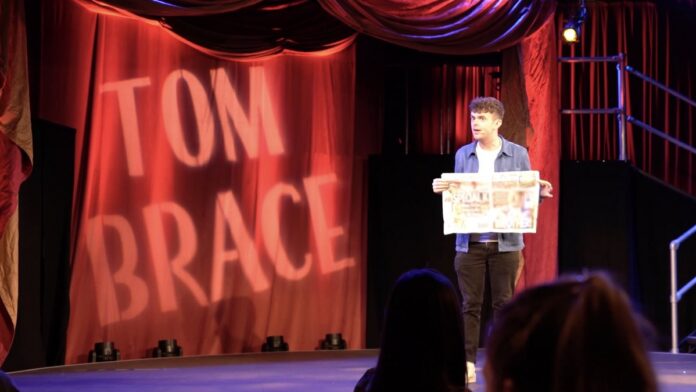 Tom Brace is a touring magician who travels around the UK with his family-friendly magic show. He’s on tour right now, which is due to stop in at St Peter’s By The Waterfront in Ipswich on 23rd October, and he took some time out of his busy schedule to chat with us.

Unlike many of the magicians he knows, Tom admits magic hasn’t always been on the cards for him as he didn’t grow up with a magic kit and dreams of becoming a magician. He has, however, always had an interest in performing from a very early age, though it was acting and musical theatre that first appealed to him and led to his drama degree at the University of Kent.

Where did it all start then?

Tom explains, “I was working at the Edinburgh Fringe Festival for one of the venues’ marketing department and I saw a magician up there called Magic Jim. He showed me this card trick and it blew my mind, I couldn’t stop thinking about it. After the festival finished, I actually got off the train in London and went to a magic shop around the corner from Kings Cross station and bought my first magic set!”

With just over four years’ experience, he is back on the road with his current tour ‘Embrace the Impossible’. The tour kicked off at London Wonderground, the underbelly venue in Earl’s Court (London), and he has completed three shows at the time of our chat.

“I like to say that it’s a magic show that doesn’t actually contain any magic tricks.” Tom explains, “It’s more like these are things I can and could do growing up. For example, I can’t predict the winning lottery numbers, but as a child I was very good at the game Cluedo because I could see 42 minutes into the future and could predict the perfect game.

“It’s a magic show that showcases my pointless abilities, with the framing of a nineties and noughties backdrop, set in my bedroom. Hopefully lots of people that grew up in that time can relate to it and remember things, but hopefully the kids that come to the show also enjoy it. It’s been really fun so far!”

Something that fascinates me, is whether there’s one standard ‘moment’ in a show that always gets a universal reaction or whether its ever changing, and with a show that’s been in the works for a year now, if there’s any pressure that comes with it.

Tom shares, “It does vary from place the place. You always expect one thing to go down better than the other, but when you get out there and start doing it, it’s never the case. The bit that you thought was still good but perhaps not the highlight of the show always ends up being someone’s favourite bit! It’s always developing on the road because of that very reason; people rarely respond how you imagine they’re going to.”

Tom tells me this tour will be his first time in Ipswich, adding, “That’s the beauty of touring, it brings you to lots of new places. We’ve got about 16 or 17 dates in the diary and only one or two of those are places I’ve been to before, so it’s very exciting.”

Like many other performers and creatives, Tom had to find new ways to entertain and make a living; especially as he was unfortunately one of the many people that fell through the gaps in receiving any government help due to being self-employed.That’s where Zoom came to the rescue!

He explains, “We were mid-tour when the pandemic struck, so we had to cancel a lot of shows, which was very upsetting. I started doing Zoom shows, and at first I thought it would never stick as it isn’t the way that this art form is meant to be. Then I wrote a show for Zoom and I absolutely loved it, it was amazing. As magicians we clubbed together and worked it out, and there was just this whole new art form that was born overnight.”

Turns out, it went down pretty well too, as Tom shared that James O’Brien from LBC had a Zoom show and absolutely loved it, and when he tweeted about it, his inbox blew up! He also had Alistair Petrie from Netflix’s ‘Sex Education’ have one for his twin boys’ birthday, which was also great and helped to save him in the pandemic.

Tom still does a few Zoom shows every week as he finds it to be a really useful way to connect with people around the world, family they don’t get to see often, or businesses that have multiple offices, and he believes it’s something that’s here to stay.

That said, live shows are where it’s at and Tom shares his passion for the art of magic and his show with great enthusiasm, “I think magic is wonderful. It’s an art form that crosses all sorts of language barriers. It brings you back to a childlike sense of wonder; and my show, I hope, will be able to do that to people.”

Lastly, I had to end on my favourite question of if you could have any superhero-type power in real life, what would it be? Tom replied, “I think I would like to be able to stop time like Bernard’s Watch (the kids TV show). I feel I never have enough time, I’m always doing something, and if I had the ability to stop time, do a bit of work, watch a bit of telly, and start again, I’d love that!”

Tom Brace ‘Embrace the Impossible’ will be at St Peter’s By The Waterfront,   Ipswich on 23rd October.